The advantage is that different common points can have different AC and DC loads, and the voltages can also be different. The load current can reach 2A/point; however, the relay output method is not suitable for high-frequency operation load, which is the life of the relay. decided. Its life is reduced with the increase of load current, generally in the hundreds of thousands of times to Jl million times, some company products can reach more than 10 million times, the response time is 10ms.

With a load capacity of 0.2A/point, only with AC load, can adapt to high frequency operation, response time is 1ms.

The biggest advantage is to adapt to high-frequency operation, the response time is short, generally about 0.2ms, but it can only take a DC5-30V load, the maximum output load current is 0.5A/point, but every 4 points can not be greater than 0.8A.

When your system output frequency is less than 6 times per minute, relay output should be preferred because of its simple circuit design, strong anti-jamming and load carrying capacity. When the frequency is 10 times/min or less, the relay output mode can be adopted; the Darlington transistor (5-10A) can also be driven by the PLC output, and then the load can be driven, which can be greatly reduced.

Disadvantages: the operating frequency can not be too high, while the relay has a long life, usually 1 million times;

Transistor advantages: the operating frequency can reach several hundred KHZ, non-contact, so there is no statement of mechanical life;

Disadvantages: Can only be connected to DC load (generally less than DC30V), the current is relatively small;

Triac (Thyristor Output): Can only be connected to AC load, high operating frequency, long life, but the rated current of the load is also small

Transistors are mainly used for positioning control. The output of the crystal is used to emit pulses. The relay cannot be pulsed and it cannot be positioned. If the relay is used to control the positioning servo or stepping, the positioning module must be added, which is not economical. With a single transistor output, servos can be controlled. That's it. According to the production process requirements, the start and stop of various indicator lights, frequency converters/digital DC governors should adopt transistor output, which is suitable for high frequency operation and short response time; if the PLC system output frequency is less than 6 times per minute, The relay output should be the first choice. With this method, the output circuit is simple in design and has strong anti-interference and load carrying capacity.

Load type: Transistors can only carry DC loads, while relays can have both AC and DC loads.

3. Transistor overload capacity is less than the overload of the relay

In general, when there is a large inrush current (for example, light bulbs, inductive loads, etc.), the transistor has less overload capacity and needs to be derated more.

The principle of relay output type is that the CPU drives the relay coil to make the contacts pull in and make the external power supply drive the external load through the closed contacts. The open circuit leakage current is zero and the response time is slow (about 10ms).

Transistor output type principle is the CPU through the optical coupling to make the transistor off, to control the external DC load, the response time is fast (about 0.2ms or even less). Transistor output is generally used for high-speed output, such as servo/stepping, etc., for output with high operating frequency: such as temperature PID control, mainly used in stepping motor control, servo control, and solenoid valve control (high valve operating frequency ).

5. In the rated working condition, the relay has life cycle times, and the transistor has only aging and no limit on the number of uses.

-- Special circuit for self test, overload, short-circuit and anti-interference 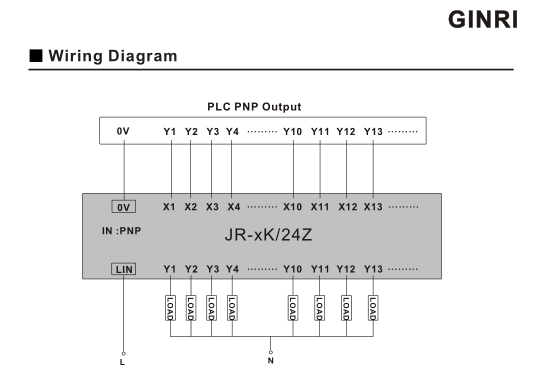