Thyristor conduction conditions are as follows: plus forward voltage and gate-triggered trigger current; its derivative devices are: fast thyristor, bidirectional thyristor, reverse thyristor, light-controlled thyristor and so on. It is a kind of high-power switch type semiconductor device, which is represented by the symbol “V” and “VT” in the circuit (the old standard is represented by the letter “SCR”)

Thyristor is a kind of switching element that can work under high voltage and high current conditions, and its working process can be controlled and widely used in electronic circuits such as controlled rectifier, AC voltage regulator, non-contact electronic switch, inverter and frequency conversion. Among them, a typical small-current-controlled device with large current. In 1957, General Electric of the United States developed the world's first thyristor product and commercialized it in 1958.

PLC bidirectional thyristor output circuit can only drive the AC load, the response speed is faster than the relay output circuit, and the service life is longer. The drive capability of the triac output is smaller than that of the relay output. The allowable load voltage is generally AC85 to 242V; the single-point output current is 0.2A to 0.5A. When multiple points share the common terminal, the output current at each point should be reduced. (If the triac output has a 0.3A single-point drive capability, the maximum allowable output is 0.8A/4 at 4 points common.) 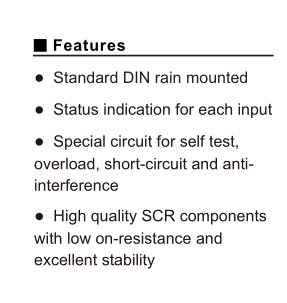